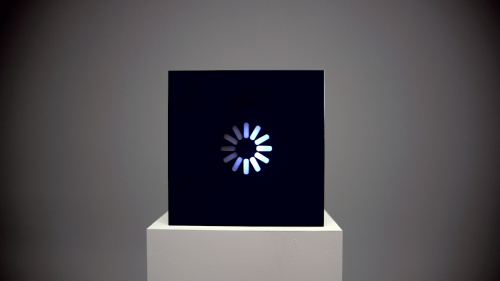 I thought this essay helpful to revisit, given our current Zoom-state.

The Center for Advanced Application’s (CAA) newest product, Infinity, makes visual reference to a class of animated icons that user interface developers refer to as activity progress indicators. These icons not only include the much maligned spinning wheel (suggested by Infinity), but also the feared beach ball of death, the hated marble of doom, the detested spinning watch, and others.

When my computer displays a progress indicator, I think back to the time I spent programming a virtual color pinwheel for the holistic health guru, Andrew Weil. Visually, a pinwheel is nearly identical to a spinning beach ball, except for the intentional blurring of colors which gives the beach ball an illusion of faster movement. New Agers use a physical version of the pinwheel as a device for meditation. When spun at seven rotations a second, the individual colors converge to create white light. As a spiritual metaphor, it speaks to the human condition, perpetually awaiting transfiguration in a supernova of light.

The Macintosh’s spinning beach ball, however, doesn’t rotate quickly enough, and when my computer freezes up, I focus my surplus energy onto the icon and fantasize that I can accelerate it to 7 hertz and make it disappear.

Progress indicators are used in situations in which a user has to wait for a computational process. There are two classes: determinate and indeterminate. Determinate indicators, often represented by an animated bar, provide a visual representation of how long a process has been running so that users can infer the remaining wait time. (But as everyone knows determinate indicators are poorly designed and processes often take longer than what is represented.) Though they bespeak a pure wasting of time, which — in a culture such as ours that demands constant productivity — is attended with anxiety, determinate indicators offer reassurances. They encourage us to be patient; they transform waiting into expectation, precisely because they make time comprehensible. They fit within the coordinates of the everyday, as there are numerous real world analogs to determinate processes: the growing belly of a pregnant woman is an indication of birth; a queue suggests the time to service; the countdown at crosswalks; etc.

Infinity references indeterminate indicators, colloquially known as throbbers. Despite being a subclass of progress indicators, throbbers in no way measure progress. They are used in situations in which the duration of a task cannot be determined and foretell a wait in which the length of time is unknown. In contrast to determinate indicators, real world analogs of indeterminate waiting are less obvious and less common. Beckett’s Waiting for Godot provides an existential example: Vladimir and Estragon, the protagonists of the play, endlessly await Godot’s arrival. (One yearns for a progress bar that could display how much time is left in their wait.) Death, of course, is a subtext of Beckett’s play, and death underlies all forms of indeterminate waiting. Given the exigencies of existence, we do not have a progress indicator to tell us how much time we have remaining. Whoever first referred to the throbber as a beach ball of death then was clearly struck by the cruel irony of such indicators. Fortunately, throbbers do not foretell the imminence of one’s earthly demise, but as a symbol of the indeterminateness of time, Infinity evokes the horizon of one’s existence and thus the proximity of death.

In his book, 24/7, critical media theorist Jonathan Crary writes cogently about the impoverishment of communities with the advent of media technologies that enable non-stop communication and work. Despite a proliferation of ways to connect with others virtually, social media evacuate a sense of being-in-common with others that is required for the strengthening of human community. Referring to Sartre’s concept of seriality, Crary writes that digital media have resulted in “the dispersal of
collectivity into an aggregate of discrete individuals who relate to each other only on the basis of hollow or narcissistic identities” (24/7, 116). This atomization is in evidence in the temporal suspensions produced by electronic media discussed here. In determinate situations one is often accompanied or surrounded by others as when one is in a line. (Inhabitants of former Eastern Bloc countries learned that human community can even form around the solidarity in waiting.) In indeterminate situations, by contrast, one is strikingly alone: Vladimir and Estragon might have each other, but their experience is solitary. When one waits in anxious anticipation for an activity indicator to disappear, one is utterly alone.

The light of a black hole

The recurring motif of time travel, temporal dislocation, and waiting in recent Hollywood movies are symptomatic of this isolation that attends our electronic condition. In Christopher Nolan’s retelling of Kubrick’s 2001, Interstellar, a black hole is envisioned as a spinning ball of fiery white light. In the movie’s concluding scenes, Cooper is found floating in space and brought back to Earth. How many decades had passed before he returned to the human community from which he was separated? Finding it impossible to reintegrate into a world that’s left him behind temporally, with only an obsolete talking box to keep him company, Cooper steals a spaceship and takes off for the blackness of outerspace. In predictable Hollywood fashion, the implication is that his love interest might still be waiting for him through the black hole. But isn’t the more challenging interpretation that when faced with the shattering loneliness and isolation of being reft from time and place, Cooper flees from the human world that is not his own for the nothingness of space, for death.

And isn’t this our condition as well? We live in solitude and disconnection from others. We are drawn in fascination to spinning indicators of endless time only to recoil at the real conditions of our existence.