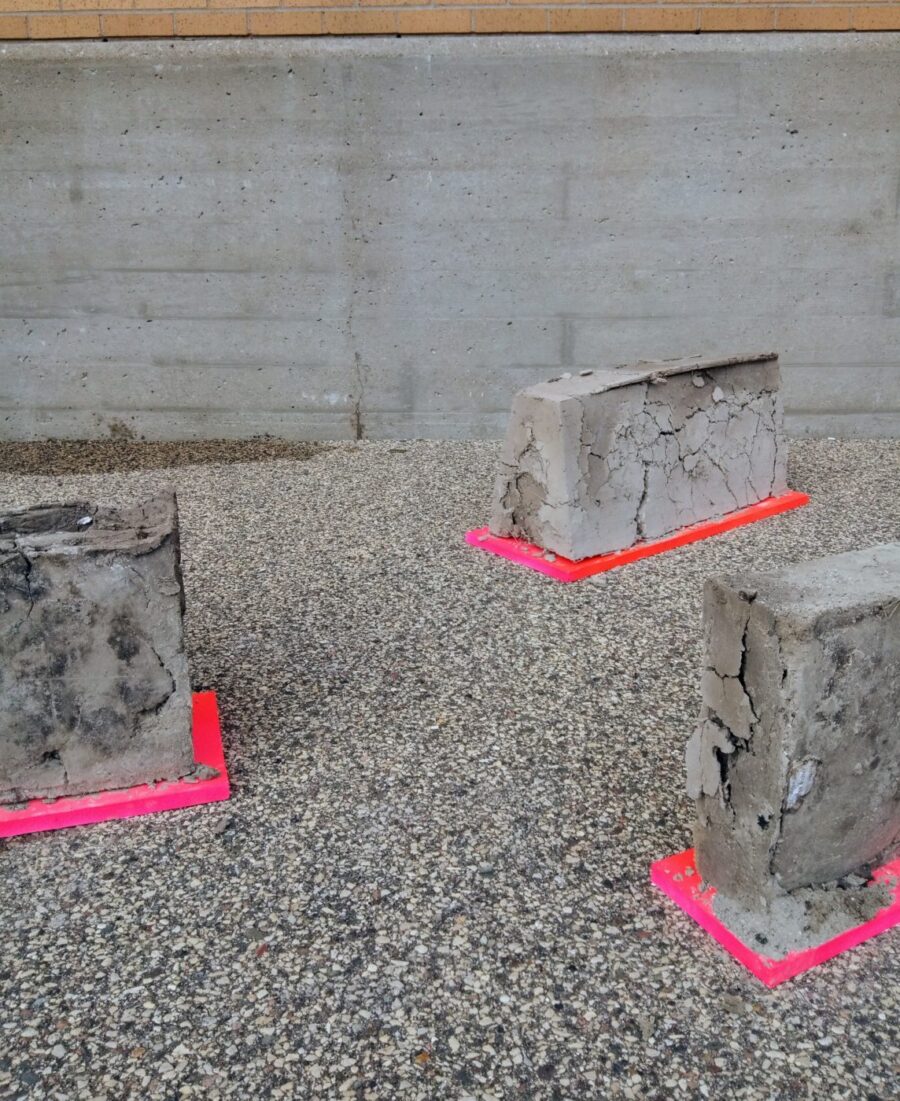 Over the last few years, I have traveled up and down the river to visit the Upper Mississippi’s 29 locks and dams in a study of its varied engineered structures and earthworks. The three sculptures created for the film reference the river’s existing infrastructure: a dam or levee, a lock, and a groyne. Though there are additional types of human interventions in the river, I focused on these as each suggests a distinct way to displace water.

A dam stops the flow of water, “impounds” it, forcing water to accumulate behind it. A dam creates an elevation difference between water above and below it. Though not as common along the Upper Mississippi River, levees also impound water, creating a difference in water level on either side of their banks.

A lock is used for raising and lowering watercraft between stretches of water of different levels. When drained of water, an empty lock chamber is a void, suggestive of absence and a reminder of water’s displacement. One of the forms shown in the film approximates the proportions of a Mississippi River lock chamber.

A groyne (also known as a wing dam) is a knife that cuts deep into a river, accelerating or decelerating its flow, often with the aim of affecting the movement of sediment. Engineers have installed hundreds if not thousands of them along the length of the Mississippi River to speed up the river’s flow and slow the accumulation of sediment in its 9-foot navigation channel.

I used adobe to make the three sculptures and sourced materials from or near the banks of the Mississippi. Adobe consists of three materials: clay, sand, and plant material. The Upper Midwest is rich in all three, and the process of researching and harvesting them locally was an unexpected education in the region’s geological history and the deep temporality of the Anthropocene. Much of the clay in the region is Decorah Shale, 400–500 million years old and widely found in the exposed bluffs along the Mississippi River where it was once used in brick and ceramic manufacturing. The sand-rich banks of the Mississippi River are eroded St. Peter sandstone, which formed the coastline of a shallow Paleozoic sea that covered much of North America about 450 million years ago. This sand has been used extensively in industry, including the windows of Ford’s Model T cars. It continues to be mined for use in the hydraulic fracking of natural gas and oil extraction. Finally, the plant material I use is straw and hay that comes from local farms. Used to feed livestock, it eventually returns to the river as run-off.

This film envisions a temporality in which it is possible to observe the Earth reclaiming materials (clay, sand, and plant) in the erosion of monuments of displacement. By imagining a future in which river infrastructure is removed, this film suggests a different ethical comportment toward the environment.